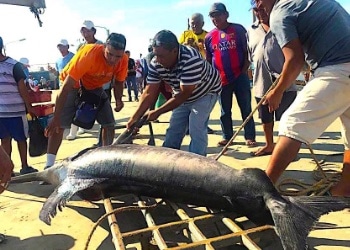 The Peruvian government agency tasked with protecting endangered species is under investigation for collaboration with shark fin traffickers who export illegal products to Asian markets, shining the spotlight on state complicity in these illicit captures.

An investigation by Ojo-Público revealed how the Ministry of Production (Ministerio de la Producción – PRODUCE), which is responsible for protecting endangered species through illegal trade, facilitated the industry’s booming industry illegal shark fins by certifying illegally caught and harvested product.

Following record seizures of nearly 50 tonnes of shark fins by Peru’s customs office between November 2018 and December 2019, the country’s authorities have opened an investigation into the administrative body that certifies wildlife exports. .

The majority of shark fins trafficked from Peru end up in China, where a kilogram can sell for up to $ 700. Global trade in this product is worth nearly a billion dollars a year, according to the Food and Agriculture Organization of the United Nations (FAO).

Peru is the world’s third largest exporter of shark fins, both legal and illegal, shipping an estimated $ 25 million worth of produce to Hong Kong between 2014 and 2018, Ojo-Público reported.

The main exporters of black market shark products in the country are said to have links with key staff within the Ministry of Production. The authority is responsible for issuing permits under the Convention on International Trade in Endangered Species of Wild Fauna and Flora (CITES), a global mechanism for monitoring wildlife exports.

These officials speed up CITES clearances for certain businesses, helping them bypass legal obstacles and certify illegal exports under the guise of legitimate trade.

Four CITES certificates were approved last year for a shark fin export company linked to the alleged boss of a criminal organization known as “Los Piratas de Puerto Pizarro” (Pirates of the Port of Pizarro) . The group operated out of the northwestern coastal town of Tumbes, and its 44 members have been charged with a number of crimes, including homicide and theft.

With shark fin sales still permitted in Peru, corrupt actors can easily camouflage fins harvested from protected species as part of legal shipments of the product. This allows contraband to enter international markets under CITES certification.

A growing demand for shark fins in Asian markets, where an expensive soup containing the ingredient is considered a delicacy, has fueled an increase in exports of animal products from Peru in recent years.

Although there have been superficial attempts to put in place measures against the shark fin trade, the political will to tackle environmental crime in Peru has always been weak.

The country’s customs authorities are poorly equipped and under-trained, preventing them from distinguishing between legal and illegal shark fin species. As a result, they are unable to properly implement CITES requirements, allowing criminals to continue exploiting security loopholes in the system.

The “lack of regulation and enforcement” in the international shark fin industry, the South China Morning Post reported, has seen “legal and illegal products melt into an unseparable quagmire.”

At the same time, corrupt PRODUCE officials are actively facilitating fin traffickers, allowing them to circumvent environmental regulations and move hundreds of tons of product through the country’s ports each year.

The same dynamic is evident in other types of eco-traffic in Peru. The country’s forestry industry reflects shark fin fishing as a magnet for corruption. In 2017, one in seven forestry officials in the country were under investigation for falsifying the origin of illegally mined timber.

About a quarter of the world’s 500 shark species are currently threatened with extinction. Of the 68 varieties of sharks that inhabit Peru’s heavily overexploited waters, some are already threatened.

Traffickers, however, will continue to exploit lax customs controls in Peru as long as there is money to be made in the trade in illegally harvested fins.

We want to maintain the largest organized crime database in Latin America, but to do so we need resources.

What are your thoughts? Click here to send your comments to InSight Crime.

We encourage readers to copy and distribute our work for non-commercial purposes, with attribution to InSight Crime in the signature and links to the original at the top and bottom of the article. Check the Creative Commons website for details on how to share our work, and please email us if you are using an article.